The weathermen seem to think that weekend rain we had was part of a ‘monsoon’. They also seem to think that London has a tropical climate, in that case. I don’t know about you but I wasn’t feeling particularly tropical this weekend as I dug out my Barbour and accepted I could no longer wear shoes with holes in the soles. Wardrobe problems aside, this rising Autumn damp means we can stoke up the fires with some hot puddings once again – hooray! 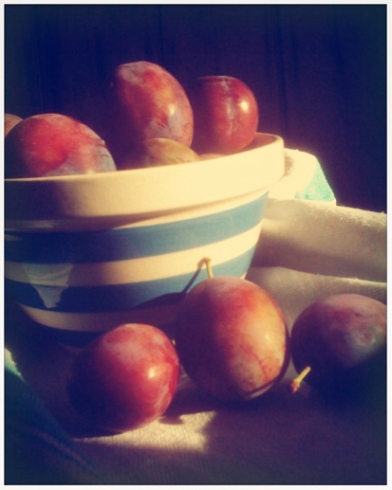 The plum tree in the allotment is heaving and the blackberries and elderberries have been out in force too. With the addition of some windfall from Ellie’s parents’ apple tree, a couple of crumbles came to mind. One of apple, blackberry and elderberry with a rough, oat-based lid for a cosy lunch with friends, and another of plum, vanilla and almond with a fine floury top for the future mother-in-law’s birthday supper.

For the first, peel, core and slice about 4 big Bramley apples and, along with a large handful of blackberries and elderberries, toss with 3 tablespoons of caster sugar and a dash of cassis. Tip everything into a baking dish. For the topping, melt 50g of butter in a pan with a tablespoon of golden syrup (or honey if you prefer) then stir in about 3-4 handfuls of porridge oats. I also threw in a handful of mixed nuts and the end of some maple and pecan cereal found languishing in the cupboard. When the topping looks well glued (add more syrup or butter if it looks dry), pile on top of the fruit and sprinkle some demerara sugar over the top for extra crunch. Bake at 180ºC for 45 minutes, or until the crimson, caramelised fruit juices are bubbling vigourously up the sides of the dish. Serve with single cream.

For the plum crumble, stone about 12 plums, cut them in half and toss with a tablespoon of vanilla sugar in your baking dish and set aside. Blitz 100g flour and 50g butter in a food processor then add 2 tablespoons each of golden caster sugar and ground almonds. Bake as before and serve with rapidly sinking birthday candles and sparkler as shown!

This entry was posted in Fresh from the patch, Puddings and tagged Almonds, Apples, Blackberries, Crumble, Elderberries, Oats, Plums, Sugar. Bookmark the permalink.