Return of the scotch egg 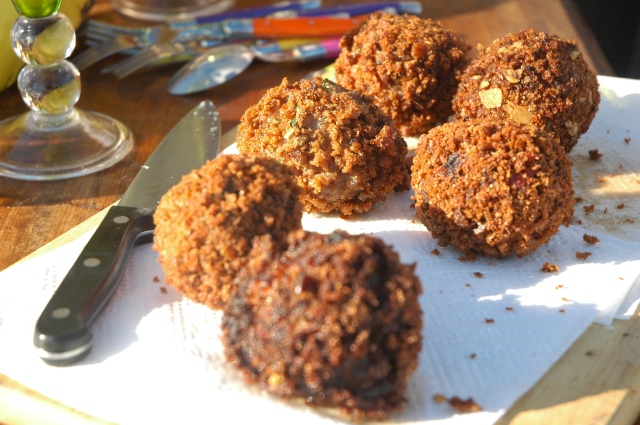 It turns out scotch eggs are nothing at all to do with the Scots. There I was on Saturday, back in the beach hut exactly a year on from last October’s foray into scotch egg-manufacturing and rolling out an efficient system for trialling new flavours, when we got going on the subject of their invention. I imagined ancient scenes of kingly banquets made up of pigs’ heads, birds within birds, pewter tankards of sloe gins and scotch eggs. We naturally attributed them to the Scots, and to some embarrassing culinary period in the Middle Ages when, due to lack of good lighting, everything was brown, likely suspicious and definitely foul smelling. I even imagined the yolks at that time to have the ugly grey chalkiness at their edges. The whole, weird notion of boiling an egg, wrapping it in meat and breadcrumbs and deep-frying it seems Medieval to me, and Northern British Medieval only. That the Scots had nothing to do with it goes entirely against my imagination.

Being a bit of a joke foodstuff, and one that polarises people more than a sniff of Marmite, they really require having a bit of fun with: Scotch eggs are not to be taken seriously. And so it was that Eliot and I embarked on a quest to add to and update the reliable but stolid flavours of the traditional sausage meat, based entirely on the contents of our weekend’s shopping basket. This time we dared to deep fry, and somehow avoided melting our sunglasses to our faces. I’d only advise doing this if you know what you’re doing – it’s a deeply unsettling (and dangerous) way to cook. 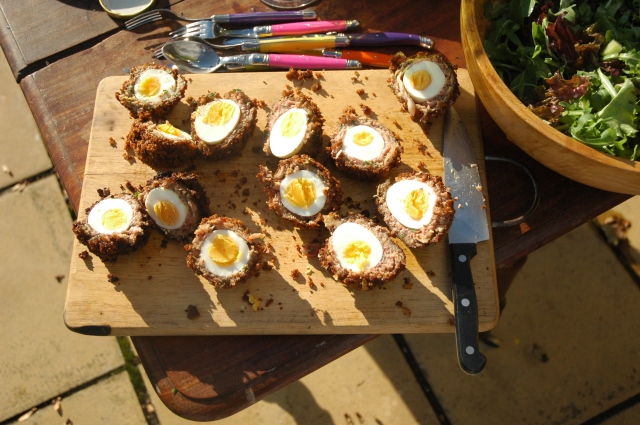 In no particular order, we created:

Tomato and Tamarind Scotch Egg (courtesy of the Thali Cafe, Bristol, whose lovely pot of tomato and tamarind chutney made its way home in our OFM goodie bag)

Yes, we added crisps to the sausage meat and the breadcrumbs. Not the healthiest of the lot, but one of the more inventive. Our clear winners were apparent in the caramelised onion and crispy bacon inventions which slid down a treat with a crisp green salad and a crisp white wine. If you want to try your hand at home made eggs, see our last post on the topic, though a few recipe updates may help you at getting the yolk’s consistency just right – experimentation is key! This time round, we used 6 eggs lowered into boiling water for 1 minute, then turned the heat off and let them sit for 10. Then they went straight into cold water to stop them cooking. Next year, we may even reduce the cooking time further.

Keep an eye on the blog this time next year for another recipe update. Salad Club scotch egg day is now an annual fixture in the calendar, like it or not!

1 Response to Return of the scotch egg